The Miami International Auto Show opened last weekend and continues through Sunday (Oct. 23) at the Miami Beach Convention Center.
As shows go, the Miami even has been ranked below the big guys (Chicago, Los Angeles, New York, and Detroit) and pretty much ahead of the rest of the shows. It is considered a consumer-driven show with no high-pressure sales tactics but few dramatic reveals of new models.
Such is the case this year. The lineup of vehicles is still without many of the European luxury brands that once again skipping the event, which is a shame because it seems like every other car you see on the road in the South Florida area is either a Mercedes-Benz or a BMW with an occasional Porsche thrown in.
The Germans apparently are looking at other avenues to garner exposure for their models as they are skipping other shows as well.
The Miami show does have kind of a neat attraction with indoor tracks to give the public rides in electric vehicles. Camp Jeep also is back to give riders a taste of an off-roading experience.
The show opened with a pretty slimmed down press day. Only a couple of model reveals were on the schedule. In that past, introductory press conferences used to run into the afternoon, but last Saturday’s wrapped up well before lunch.
Dodge and Nissan took advantage of the opening to showcase a one new model and a updated version of one of its traditional models.

For Dodge, it was the reveal of the 2023 Dodge Hornet, a performance-driven compact SUV that comes in two versions. The Dodge Hornet GT comes with a turbocharged 2.0-liter 4-cylinder engine rated at 268 horsepower and 295 pound-feet of torque resulting in a zero-to-60 in the mid-to-low six second level, said Fernando Fernandez, Dodge Hornet brand manager who made the presentation.
Going up the performance ladder, Fernandez said, is the Dodge Hornet R/T trim which features a 1.3-liter turbocharged engine to power the front wheels and a completely independent electric motor to power the rear wheels in the all-wheel-drive configuration.
Overall the package can deliver north of 285 horsepower with an even bigger jump in torque to 383 pound-feet, Fernandez said.
The 2023 Dodge Hornet GT will hit showrooms later this year while the R/T version will be available early next year. Pricing has yet to be firmed up but it is expected to be in the neighborhood of $30,000. 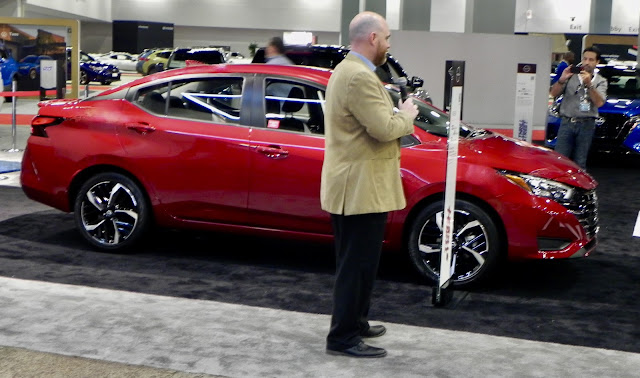 At the Nissan booth, the Japanese automaker unveiled the 2023 Nissan Versa for its first showing.
“The 2023 Versa is completely refreshed inside and out,” Bill Miller of Nissan’s marketing team said in his presentation.
It starts with a new front fascia featuring a reimagined grille and continues with each trim level — S, SV and SR — getting distinctive upgrades and features. The SR gets a new 8-inch color touchscreen display on the interior, Miller said.
“We’re really happy to incorporate that into the SR trim on the Versa,” Miller said. “And then we have a number of items that were previously in a package on the SR that now come standard, like heated seats and intelligent cruise control.”
There’s  reason people really see value in a Versa, Miller said.
“We’re really proud of this vehicle,” he said, “and it’s a really important part of our lineup.”
.
Pricing has yet to be finalized, he said, “but I can guarantee that we will continue to deliver the best value in this segment.”
The Dodge and Nissan models aside, the official Show car of the 2022 Miami International Auto Show is the all-electric Ford F-150 pickup, and Star of the Show as selected by a panel of judges of the Southern Automotive Media Association is the Ford Bronco Raptor, a traditional gas-power SUV oriented toward off-roaders. SAMA has traditionally selected a Star of the Show since its founding in 2007.
This year it also singled out four vehicles for runner-up recognition starting with the Chevrolet Corvette Z06 as first runner-up, the Lightning for second runner-up, and the Cadillac Lyriq and Toyota GR Corolla to share third-runner up honors.
Posted by Paul Borden at 1:02 PM