MY PREDICTION: LEXUS TO PUT OUT HYBRID HATCHBACK FOR 2011 YEAR

I know it’s hard to imagine, but the government is misleading us again.
Transportation secretary Ray LaHood is taking credit for something he couldn’t possibly have had any influence on.
Lahood, at a conference in Colorado with EPA administrator Lisa Jackson last week, said that the administration’s CAFE standards are responsible for the many hybrid vehicles that are on the road today.
“I think we jump-started the ability,” said LaHood was quoted in news reports. “When you see now a Lexus hybrid, no one would have ever predicted that two years ago. Every car manufacturer is getting into hybrid. I think we jump-started those opportunities.”
Oh, really?
It’s a matter of record that simply isn’t true. Toyota has long been in the forefront of the hybrid trend since bringing the Prius to the U.S. market for the 2001 model year, and the Japanese automaker was working on hybrid power for Lexus models long before even the 2008 election.
Here’s what the company’s website has to say:
“In April 2005, Lexus introduced the crossover RX 400h, the world’s first hybrid-powered luxury vehicle. Two months later Toyota launched the Highlander Hybrid sport utility vehicle (SUV).
“One year later in April 2006, the Lexus GS 450h made its debut as the world’s first front-engine, rear-wheel drive, full-hybrid performance sedan.”
That’s damning enough, but what is even more disturbing about LaHood’s comment is his apparent assumption that an edict the administration put out a couple of years ago is already having such a huge impact on automotive production.
The timetable from idea and drawing board to the auto showroom is a process that usually takes several years. Even taking into consideration Toyota’s extensive experience and background in hybrid technology, which could speed up the process, it still would be realistic to see such quick results.
In fact, when it announced in 2010 it was planning on having a hybrid version of every model it produces, the company gave itself a timeline of 10 years to complete the goal.
So Ray Lahood, who is transportation secretary remember, is either appalling ignorant about a key industry under his domain, or he is, well, simply lying to make his department (and the administration) look good.
I simply can’t think of any other way to put it.

I’ll let you guess which one.
Posted by Paul Borden at 6:07 PM No comments: 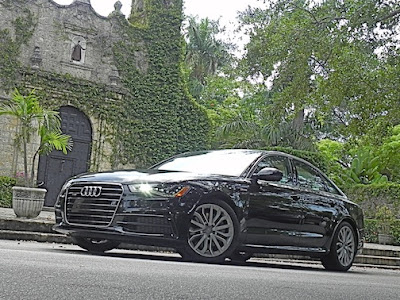 The Audi A6 was my drive last week. You can read my review at Examiner.com.

As I note in the writeup, the thing that puzzles me is why somebody would pay at least $20,000 more than the cost of the A6 just to get the A8.

Sure, the A8 is bigger, but the A6 is plenty roomy. I didn’t ride in the backseat, but I did sit in it to see how much legroom I had. I had plenty.

But then, the people who are shopping in the range of the A8, which starts at just under $80,000, probably don’t care about the extra money it costs.

Still, I also liked the lively drive the A6 3.0T delivers.

Here’s kind of an oddity, by the way. Though Audi uses a “T” designation, the 3.0 V6 engine is actually supercharged, not turbocharged.

WHAT I LIKED ABOUT THE A6: The performance. The A6 gets from zero-to-60 mph in under six seconds. I also found the ride comfortable.

WHAT I DIDN’T LIKE ABOUT THE A6: I’m getting more familiar with it, but Audi’s MMI (Multi Media Interface) system for performing many functions like the radio and car settings still can be a bit of a pain to fool with. I don’t know what it is the Germans. I guess since BMW loaded the iDrive system on us a few years back and Mercedes-Benz has its COMAND system, Audi felt it needed to have something as well. I find most of the controls in other luxury cars, specifically those from Asian, more intuitive to operate.

Thanks for reading!
Posted by Paul Borden at 6:07 PM No comments: