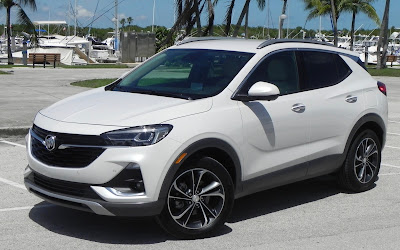 “Trickle down” is not just an economic theory that either works or doesn’t work mostly depending on your political views, but there is no doubt that “trickle down” when referred to in the automotive world works.
Today safety and driver assistant features that once were exclusive to high-end luxury cars often are showing up on much less expensive vehicles, and not just as options. 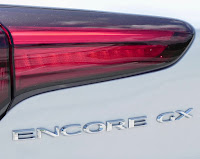 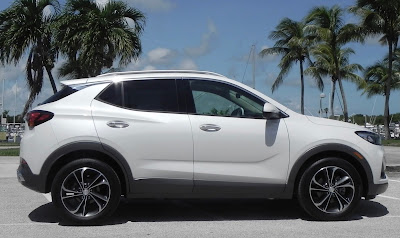 Other niceties like rear park assist,  rear cross traffic alert,  lane change alert with blind zone alert, rear camera mirror (which provides a wide, less obstructed rear view while parking and driving), hands-free power liftgate, adaptive cruise control, head-up display, automatic parking assist with braking, and high definition surround vision camera system are available.
Though the Encore GX nameplate might suggest it is just a new trim from the Encore that was introduced for the 2013 model year, the Encore GX actually is a new model, a bit bigger (171.4 inches long to 168.35) with nearly 5 more cubic feet of cargo space behind the second row than its Encore sibling. 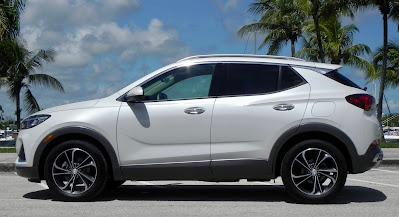 The Encore GX slots between the smaller Encore and slightly larger Envision and Enclave SUVs and comes in three trim levels — Preferred, Select, and Essence, a front-wheel-drive version of the latter serving as my test vehicle for the week.
The Encore GX is slightly more expensive than the Encore with a starting price just under $26,000. The Encore GX Essence FWD carries a starting price of $29,495 including the $995 destination and delivery charge. 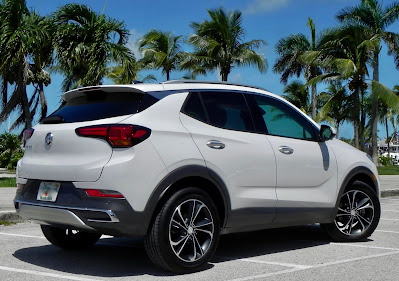 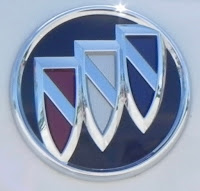 An Advance Technology Package (surround vision, head-up display, adaptive cruise control, and navigation), Convenience Package (automatic parking assist with braking, wireless charging, rear camera with washer, and rain-sensing windshield wipers) and other options ran the final bottom line to $34,065, which frankly is in the higher ranges of the segment.
My test vehicle came with a turbocharged, 1.3-liter 3-cylinder engine with a CVT (continuously variable transmission). The engine puts out 155 horsepower and 174 pound-feet of torque with fuel mileage of 30 miles-per-gallon city, 32 highway, and 31 combined.
The base engine is a 1.2-liter turbo rated at 137/162, respectively. A 9-speed automatic transmission is available on AWD models with the 1.3L engine. AWD models also include the capability to switch to FWD for slightly better fuel economy if conditions allow. 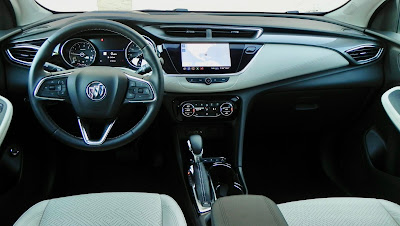 Neither engine is going to wow you with its power and pickup, though driving around town it seemed peppier than the numbers might suggest.
The addition of the Encore GX to Buick’s crossover/SUV lineup (while keeping the original Encore) is further reflection of consumers’ current tastes. The company reports that its crossovers/SUVs account for nearly 90 percent of their current sales.

What I liked about the 2020 Buick Encore GX Essence: Infotainment features are plentiful and easy to operate, though to get the really good stuff you have to add optional packages even on the top-of-the-line Essence trim, and that can run the final price up. It’s an attractive SUV with a nice interior. GM has come up with a way to display the head-up display that projects speed in line of the driver’s sight even while wearing polarized sunglasses!
What I didn’t like about the 2020 Buick Encore GX Essence: Pricing is on the high side in the segment and adding packages for navigation and a surround-vision camera takes the bottom line even further up. The view out the back is somewhat restricted, and front seats are snug. It’s not the liveliest compact crossover to drive, but it’s not all that bad.
Would I buy the 2020 Buick Encore GX Essence? I don’t like vehicles with CVTs because they don’t offer much in the way of driving fun, which rules out FWD Encore GX models for me, but I would look at AWD Encore GX models where the 9-speed automatic is available. Overall, it’s a nice-looking, functional crossover SUV. Definitely not an “old” Buick. 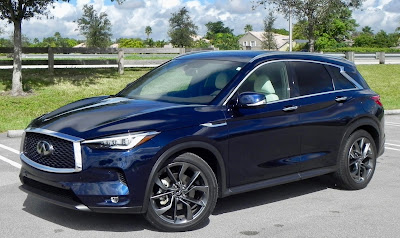 Having undergone a name change in 2014 and a redesign for 2019, Infiniti’s QX50 gets two new trim levels for 2020 with Sensory and Autograph models adding to the top of the lineup and giving buyers five looks to choose from, all offering a choice of either front-wheel or available all-wheel drive.
Introduced as the EX35 for the 2007 model year, Infiniti’s compact luxury crossover SUV got its QX50 nameplate when the company began labeling its vehicles with a Q designation for its coupes and sedans and QX badging for its crossovers and SUVs in 2014.

All trims for the QX50 essentially offer many features common to the luxury segment starting with the Pure base model with keyless entry and push-button start, hands-free liftgate, upgraded seating surfaces, power adjustable front seats, and Bluetooth communications and continuing from there up the line with Luxe, Essential, and the new Sensory and Autograph trims adding more standard features.

A new-generation Infiniti InTouch infotainment system includes a WiFi hotspot for up to seven devices, Apple CarPlay and Android Auto and a dual touchscreen operation that allows you to make adjustments for the radio, for example, without leaving the larger navigation screen.
That system is standard in all trims, but a lot of the more exotic stuff, however, is available as either standard or options only on the upper trims. 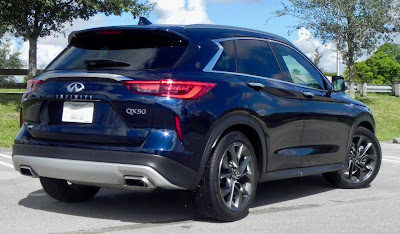 A turbocharged inline 2.0-liter 4-cylinder engine mated to a CVT is standard in all QX50 models (Pure, Luxe, Essential and the new Sensory and Autograph trims). It provides 260 horsepower and 290 pound-feet of torque for a spirited, though not overwhelming performance. In Sport mode, it can be quite jumpy. Paddle shifters add simulated “shift” points to the CVT operation.
Fuel mileage (22 miles-per-gallon city, 28 highway, and 25 combined for the AWD version) is similar to its competitors in the small luxury SUV segment. 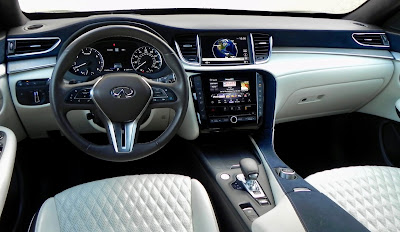 The strength of the QX50 Autograph lies in a cabin that features high-quality materials such as natural wood accents and many soft-touch surfaces. Seats are supportive and comfortable, and the Autograph comes with a 16-speaker Bose Premium Sound System to please the ear.
Legroom and headroom are up to 39.6 and 40 inches, respectively, in the front and 38.7 and 38.4 in the back. Cargo space, too, is plentiful and can expanded to 64.4 cubic feet with the back-row seats folded. 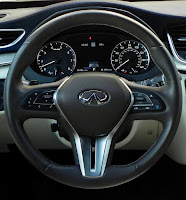 Other standard features on the Autograph include the Infiniti Intouch infotainment system with navigation, a motion-activated rear liftgate, a head-up display, a panoramic moonroof, Ultrasuede headliner, climate-controlled front seats, rear-passenger window shades, and LED headlight, daytime running, and fog lights.
Though the QX50 Pure base model has a starting MSRP under $40,000, the Autograph model tops the pricing with an opening price of $55,850. Extras, starting with a $2,000 Premium White Leather Package, ran the final bottom line of my test QX50 to $60,070 including the $1,025 destination and delivery cost. 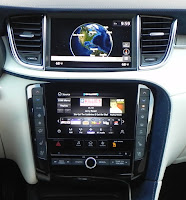 What I liked about the 2020 Infiniti QX50: The cabin oozes class especially when equipped with the Premium White Leather package that features white leather-appointed seating with quilted stitching, blue Ultrasuede accents, and brown Ultrasuede headliner. While some reviewers have criticized the double-screen center stack, I like it. You can make audio adjustments on the lower smaller screen without disturbing the larger navigation monitor. Not sure why critics found it confusing, but some apparently did. Cargo space is a generous 31.1 cubic feet behind the second row.
What I didn’t like about the 2020 Infiniti QX50: I can do without the CVT. An 8- or 10-speed automatic would better take advantage of the engine power and enhance performance, but a continuously variable transmission is a big part of the Nissan-Infiniti DNA.
Would I buy the 2020 Infiniti QX50? Yes. The QX50 offers something different from the usual suspects in the compact luxury segment.

Posted by Paul Borden at 2:38 PM No comments: 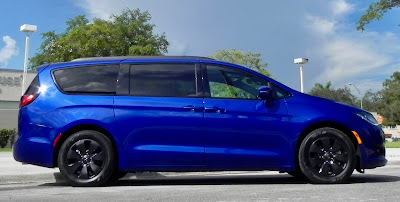 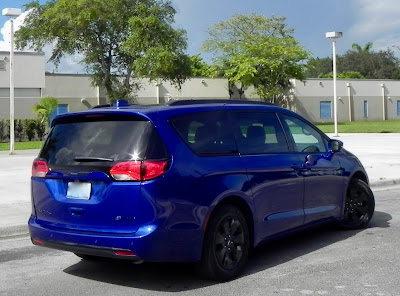 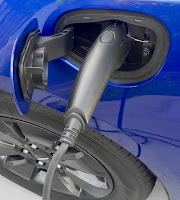