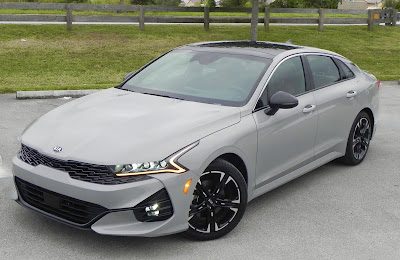 KIA MOVES ON FROM OPTIMA

When it came time for Kia to update its Optima sedan after nearly 20 years of production, the South Korean automaker didn’t mess around.

The overhaul was so extensive that the old Optima is completely gone, replaced by a new vehicle, the K5, for 2021 with a major upgrade in both appearance and features from its predecessor.
The 2021Kia K5  already has had a huge impact in sales, taking over the No. 2 spot in Kia’s November report, passing the smaller Forte behind only the company’s popular Telluride SUV after just its fifth month in showrooms.

With an all new platform, the new K5 is longer, wider, lower, and, according to the company, stronger than its predecessor. It is offered in five trim levels — LX, LXS, GT-Line, EX, and GT — with two turbocharged engines depending on the trim and available all-wheel drive instead of the standard front-wheel-drive setup.
Most trims, like the GT-Line that I checked out recently, get a 1.6-liter turbo 4-banger that checks in at 180 horsepower and 195 pound-feet of torque and is mated to an 8-speed automatic transmission.

The top-of-the-food chain GT model gets a 2.5-liter turbo-4 that ups horsepower and torque numbers to 290 and 311, respectively, and is mated to a new “wet” double-clutch transmission.
Fuel mileage numbers for my GT-Line model are a solid 26 miles-per-gallon city, 34 highway, and 29 combined which puts it in the middle of the segment. 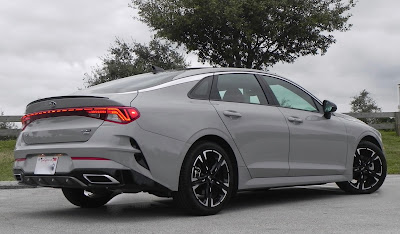 Numbers for the dual-clutch GT model are slightly less, but you have to pay some price for the 5.8-second zero-to-60 clocking Kia reports for the GT. 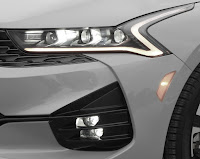 The K5 has a coupe-like sleek profile that does cut down on rear headroom to 37.8 inches and requires you duck your head wisely when getting in the backseat, but that also gives the K5 a classier outer appearance.
The impression that there is more to the K5 GT-Line than just a typical run-of-the-mill midsize sedan carries over to the interior, where there is amble legroom (46.1 inches in the front, 35.2 in the back) and cloth and leatherette seat trim (with the GT-Line logo) to accommodate your tush. 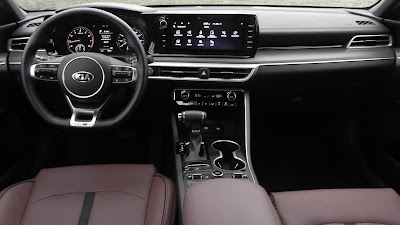 Yes, you will find hard plastics in the cabin, but there is also generous use of higher quality materials as well for a near-luxury feel.
The list of creature comforts on the K5 GT-Line is extensive as well. They include a tilt-and-telescoping steering column, front console with armrest and good-size storage bin, dual-zone automatic climate control, and a leather steering wheel with buttons for Bluetooth, audio, and cruise controls.
Standard technological systems include Apple CarPlay and Android Auto, second-row USB charge ports, an 8-inch touchscreen for infotainment functions, a rearview camera with dynamic guidelines, and push-button start. 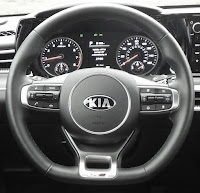 That left only a couple of options for my test vehicle with special wolf gray paint and navigation with a 10.25-inch screen running the bottom line to $31,300 including the $965 destination and delivery cost.
What I liked about the 2021 Kia K5 GT-Line: The exterior has a sleek profile that gives the K5 the look of a higher class model. The infotainment system comes with a touchscreen that (with one exception noted below) is very user friendly. Most safety features are standard. Trunk capacity is a generous 16 cubic feet, which is usually confined to full-size sedans.
What I didn’t like about the 2021 Ki a GT-Line: It’s no more than a slight annoyance in the operation of infotainment features, but I still would like a knob to surf the radio dial instead of using the touchscreen.
Would I buy the 2021 Kia K5 GT-Line? Yes. It faces a lot of tough competition from its Japanese rivals and even its South Korean compadre Hyundai (which owns a 34-percent share of Kia), but it still is worth a look if you are looking for an attractive and value-laden passenger sedan.

Posted by Paul Borden at 1:31 PM No comments: 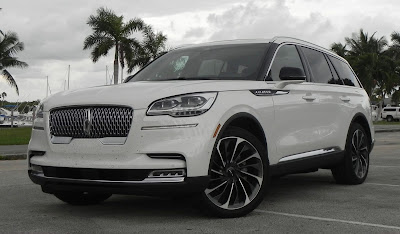 LINCOLN BRINGS BACK AVIATOR NAME
FOR ITS LATEST MIDSIZE CROSSOVER SUV
After a brief run over a decade ago, the Aviator name is back for Lincoln, and it is welcome change from the use of alphanumeric nomenclature among luxury class vehicles, whether they been sedans, coupes, convertibles, or the growing crossover SUV segment.
It is much easier to remember “Aviator” than it is “MKX” or whatever Lincoln’s previous midsize SUV was. 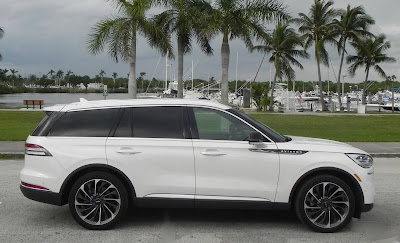 The turbocharged 3.0-liter V6 is mated to a 10-speed automatic transmission and is rated at a healthy 400 horsepower and 415 pound-feet of torque. Those are decent enough numbers for a competent driving experience, though for a real punch the hybrid offers a combined 495 hp and 630 lb.-ft. Those numbers are based on premium fuel, but the Aviator also accepts regular.
Rear-wheel drive is standard on the Aviator with all-wheel available. Black Label models come only with AWD. 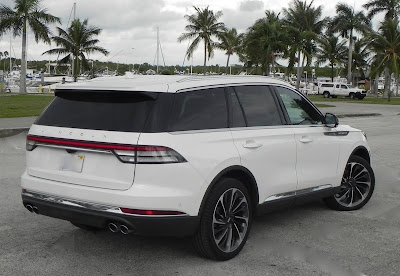 The Reserve trim served for my test drive and with the available AWD offered fuel mileage figures of 17 miles-per-gallon city, 24 highway, and 20 combined. According to the government, that will cost you an extra $2,500 in fuel costs over a five-year period.

Adding extras like Lincoln’s Co-Pilot Plus system (evasive steering assist, reverse brake assist, and active park assist), a luxury package that adds a massage function to front seats, a convenience package that provides a head-up display for the driver to monitor speed and also allows you to use your smart phone as a key, a panoramic sunroof, 23-inch wheels, and a dynamic handling package ran the total up to $75,815 with the $1,995 destination and delivery charge included.
You can add a towing package for your boat. Or a camper trailer for that matter, but I’m thinking if you are shopping in this class you’re probably more likely to have a boat than a camper. 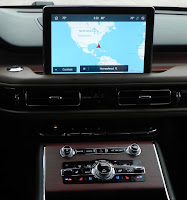 What I liked about the 2020 Lincoln Aviator Reserve AWD: The exterior styling is exquisite and the interior is very classy. Technological features, including a standard surround view camera, are plentiful and very user friendly. The adaptable cruise control works very smoothly and efficiently. I also liked the way the Aviator lights up as you approach it with the key fob in your possession.
What I didn’t like about the 2020 Lincoln Aviator Reserve AWD: I only inputted one destination on the navigation system, and it didn’t quite take me all the way to where I wanted to go. Could have been operator error, I suppose, but not sure about that since it did get me close and my phone had it right.
Would I buy the 2020 Lincoln Aviator Reserve AWD? Definitely. This is a roomy SUV with all the features you would want in a luxury vehicle, and it is very easy to maneuver through tight parking lots. 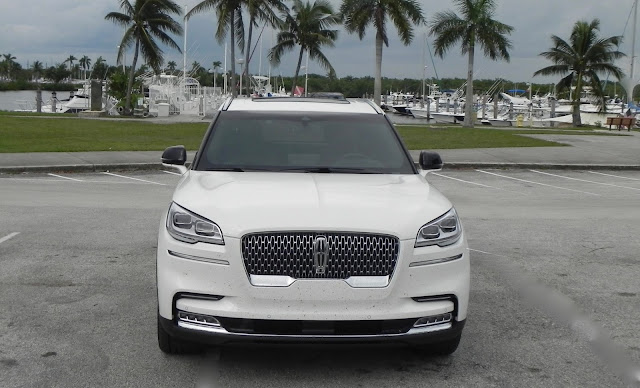 Posted by Paul Borden at 7:49 AM No comments: 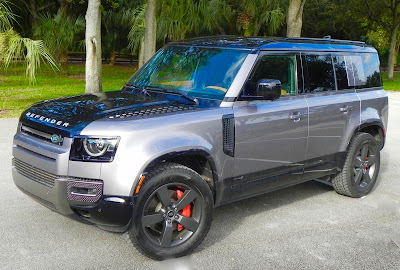 The 2020 Land Rover Defender is a new SUV sporting an old name.

First introduced in 1983 as the Land Rover 110 with a Land Rover 90 coming a year later — the designations were based on the vehicle’s wheelbase, not engine size — the name was altered to Defender in 1990, but it wasn’t too survive very long in the U.S. market.
Land Rover ceased selling the Defender in the U.S. after the 1997 model because the sporty off-roader did not meet U.S. safety requirements, and  the company ceased production period overall in early 2016 only to bring back the name on a much different — and presumably safer — vehicle for 2020. 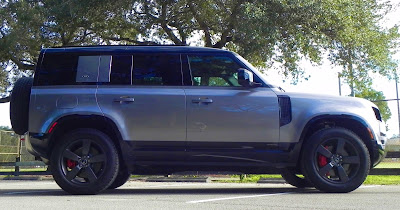 The Defender is offered in six trim levels (base Defender, Defender S, Defender SE, Defender HSE, Defender X and Defender First Edition.) and two body styles, a two-door Defender 90 and four-door Defender 110.
Four distinct accessory packs including one (Explorer) that adds even more features to expand the Defender’s abundant off-roading capability) gives buyers the opportunity to trim their vehicle to their specific tastes and needs. 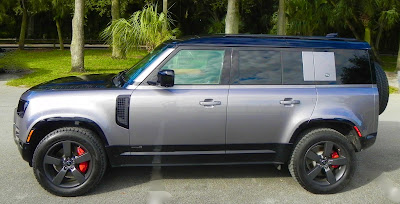 Five-passenger seating is standard, though a jump seat may be added between the front bucket seats and third-row seating is available on the four-door 110 models.
A 2.0-liter, turbocharged 4-cylinder engine is standard with a 3.6-liter turbocharged inline 6-cylinder available in upper trims. The engines are mated to an 8-speed automatic transmission, and all-wheel drive is standard, of course, with a 2-speed transfer box. 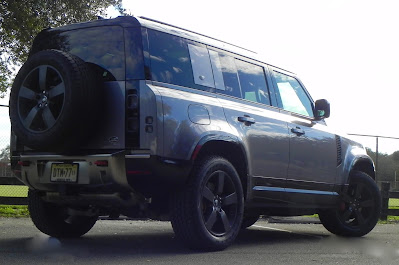 My vehicle for the week was the Defender 110 X, the top-of-the-line trim with a starting MSRP of $80,900, a good-size leap over the $48,900 for the base model with the 4-banger.
The 6-cylinder pumps out 395 horsepower and provides 405 pound-feet of torque compared to the 296/295, respectively, for the 4-banger while still providing fuel  economy of 17 miles-per-gallon city, 22 highway and 19 combined. The government reports figures of 18/21/19 for the 4-cylinder. All figures are based on use of premium fuel.

Land Rover reports a zero-to-60 mph clocking for the 6-cylinder compared to 7.7 for the 4-cylinder, but both deliver a maximum towing capacity of 8,210 pounds.
The Defender 110’s cabin is spacious with up to 39.1 inches of legroom for those in the second row on five-passenger models and 38.5 when a third row is added. 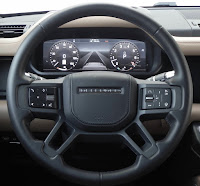 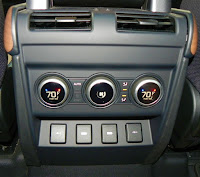 Posted by Paul Borden at 7:59 AM No comments: