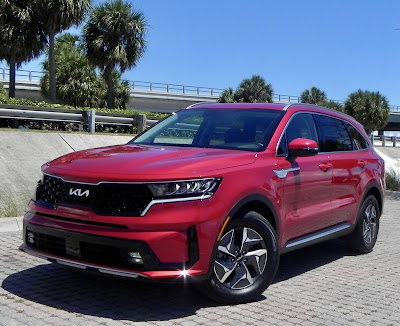 Talk about good timing. With gas prices hitting record levels, Kia is bringing the plug-in version of the Sorento to showrooms this year after introducing the standard gas-electric hybrid drivetrain on the Sorento last year.

The two hybrid models round out the portfolio for the company’s SUV that slots in between the smaller Sportage and slightly larger Telluride in the South Korean’s stable. Even though a bit more compact than the Telluride, the Sorento still offers 3-row seating.
This review is based on the EX version of the 2022 Kia Sorento Hybrid. Only one other trim is offered on the Hybrid, the base S that comes with a similar drivetrain, a 1,6-turbocharged 4-cylinder gas engine and electric motor paired with a 6-speed automatic transmission, but with fewer standard features. 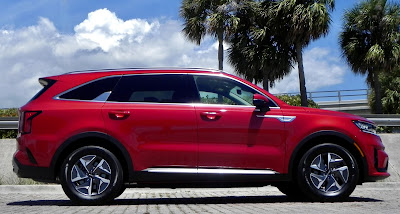 Combined horsepower in gas-electric operation is a hefty 227 and combined torque 258 pound-feet, which results in a spirited drive while providing fuel efficiency numbers of 39 miles-per-gallon city, 35 highway, and 37 combined. Towing capacity is listed as 1,654 pounds.
The new plugin kicks the combined horsepower number up a notch to 261 and fuel ratings up to 79 MPGe, Torque in the plugin is identical to that for the standard Hybrid. The plugin, however, carries a price tag around $10,000 higher than the standard hybrid’s MSRP, which is a pretty steep premium for about 32 miles of all-electric driving. 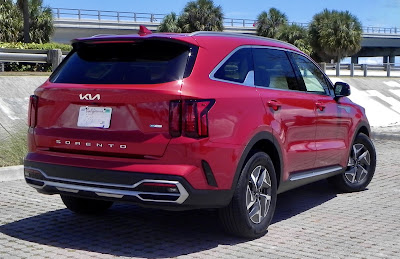 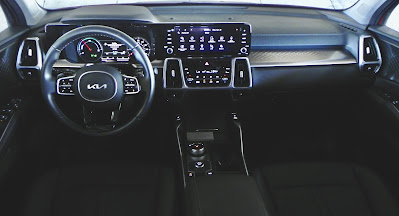 The government gave the 2022 Kia Sorento Hybrid EX an overall 4-star safety rating with 4 stars for frontal crash and rollover and 5 stars for side crash protection.
Leatherette seats are standard on both EX and S trims, and split-folding captain’s chairs are standard for the second row. Legroom in the front is a generous 41.4 inches and 40.7 in the second row. Third-row occupants get only 29.6 inches of legroom, limiting them to mostly children and perhaps very limber adults for short jaunts.

Cargo space behind the third row is12.6 cubic feet, which is not even a good sedan trunk, but fold up that back row and you get 38.5 to 45 cubic feet.
With so much included in the starting MSRP, the only extras on my test 2022 Kia Sorento Hybrid were $445 for Runway Red paint and $210 for carpeted floor mats. Add in the $1,175 destination charge the final bottom line came to $37,820. Items like a panoramic sunroof and rear-season entertainment package can add another $2,800. 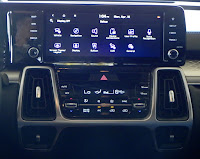 What I liked about the 2021 Kia Sorento Hybrid EX: Infotainment features are plentiful and user friendly. The interior is nicely done and roomy. It has plenty of power and handles well. The ride is quiet. The rearview camera features dynamic guidelines, and the new 10.25-inch touchscreen includes navigation. Adaptive cruise control and parking assist are covered in the base MSRP.
What I didn’t like about the 2021 Kia Sorento Hybrid EX: Cargo space when the third-row seats are in place is limited to the size of an average sedan (or less). If you need the third row for trips, you likely are going to have to store baggage on the roof. Fortunately, roof rails are included in standard equipment.
Would I buy the 2021 Kia Sorento Hybrid? Yes. I have never been a big fan of hybrids but this one doesn’t drive like the usual gas-electric hybrid. I would go for it rather than pay the extra cost for the plug-in version. 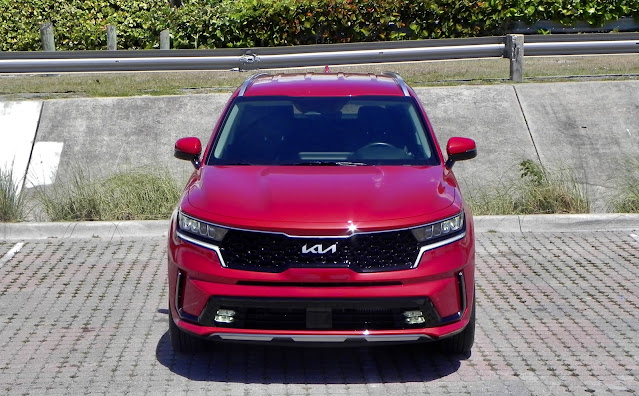