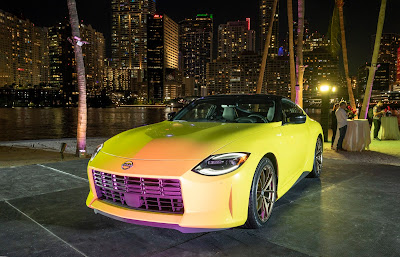 The 2021 Miami International Auto Show opened this past weekend in Miami Beach, and though there were considerable no-shows, there also were several interesting vehicles on display on the Miami Beach Convention Center floor.

At the top of that list would be the new 2023 Nissan Z, which earned “Star of the Show” honors from the Southern Automotive Media Association, a Miami-based media group that has recognized top vehicles at the show since the organization’s founding in 2007. (Just for the record, the show dates back to 1971.)
The iconic, seventh-generation Z also was on display (see above) at a special reception at an opening reception at a Miami hotel the night before the show’s Saturday opening (Oct. 16).
The Z features a twin-turbo V6 engine that is rated at 400 horsepower at 6400 rpm and 350 pound-feet of torque from 1600-5200 rpm and mated to either a 6-speed manual or 9-speed automatic transmission that features standard and sport modes.

When it goes on sale next spring it will be offered in two grades — Sport and Performance — in the U.S.

The Z — Nissan has dropped the numerical designation from the name —  will hit showrooms as a coupe with a convertible to follow later.

Though the Z received top honors from SAMA, it was not the only vehicle to get attention on the show’s Media Day.

Stellantis, the corporation that emerged when Fiat-Chrysler and the French PSA Group (think Peugeot and Citroen) joined forces, showed the new resurrected Wagoneer SUV and the L version of the Jeep Grand Cherokee SUV.

Like Ram’s breakaway from Dodge, the Wagoneer is now a stand alone brand after a long history under the Jeep banner. The 2022 model is available as a standard Wagoneer and the fancier Grand Wagoneer. It may be a separate vehicle now, but it still retains Jeep’s traditional seven-slot grille!

Toyota also previewed the new Corolla Cross, an SUV-version of its best-selling sedan, as well as its full-size Tundra pickup. The Tundra is all-new for 2022 and Toyota East Coast Communications Director Zachary Reed is particularly high on it.

“It’s incredible,” he said. “I can say with supreme confidence that this new Tundra is better in every single way over the outgoing model. It is absolutely a game-changer.”

As for the Corolla Cross, Reed said it is expected in dealerships in the next few weeks. The first ones just rolled out of the new Mazda Toyota plant in Huntsville, Ala., last week, Reed said.

I mentioned “no shows” earlier. The list of manufacturers with vehicles on display included Cadillac and Chevrolet from General Motors, Ford and Lincoln, Hyundai and Genesis, Kia, and Subaru.
In addition to a Toyota display, Lexus is there, and Stellantis leads the way with displays for Alfa Romeo, Chrysler, Dodge, Fiat, and Ram in addition to Jeep and Wagoneer.

Notably absent are usual participants Honda, Mazda and Mitsubishi from Japan and all the European brands. No Audi. No BMW. No Jaguar. No Land Rovcer. No Mercedes-Benz. No Porsche. No Volkswagen. No Volvo.

No doubt much of that has to do with Covid cautions — even the Miami show’s scheduled February 2021 dates were pushed back to the traditional fall time period because of the pandemic — but also perhaps a change in the way some manufacturers are looking at auto shows as opposed to using other venues to get their products in front of the public.

Detroit even canceled its 2021 North American  International Auto Show in September for a program it called Motor Bella. It was an outdoor event featuring three days of press and industry previews followed by three days for the public.

The current Miami Show opened to the public last Saturday afternoon and runs through Sunday (Oct. 24). For information on hours and tickets, visit www.miamiautoshows.com.
Posted by Paul Borden at 2:27 PM