I figured that would get your attention.

Actually, except for a few off days in winter, it’s pretty much always topless time at the beaches of Miami Beach, most notably South Beach.

What I’m writing about here though is Topless in Miami, which is a competition our media organization, the Southern Automotive Media Association, conducts to recognize the most outstanding convertibles of the year.

You can read about last year’s event, which was our first, at either the association’s website, www.samaonline.org, or the website our webmaster created just for the event, www.toplessinmiami.com.

Don’t worry. It may not look good in your computer directory history when you go there, but it is a Safe for Work site.

Topless in Miami came about when we were searching for an event in the first half of the year to complement our fall and winter activities, which are Rides-N-Smiles (where we give kids from Baptist Children’s and Miami Children’s hospitals who have cancer or other life-threatening problems rides in luxury performance cars around the Homestead-Miami Speedway road course), our auto show judging at the South Florida International Auto Show, and our Christmas party.

We thought that something along the lines of the Texas Truck Rodeo, which is sponsored by the Texas auto writers, would be ideal. Whatever manufacturer wins Texas Truck of the Year is a big deal. We wanted to do the same.

But pickups and SUVs, popular as they are, don’t fit Miami’s image. We gave some consideration to luxury cars (better), and then to green cars (ugh).

Finally, we hit on convertibles.

I’m not sure who came up with the name Topless in Miami, though I am often given credit (blame?) for it. Whatever, most everyone agrees it is an attention-getter.

Our first event was a hit, and we named the Audi R8 Spyder our Convertible of the Year.

Now it’s time for our second. Manufacturers will have 17 models at the Ritz-Carlton on Key Biscayne for our members to judge, beginning in the morning Thursday and continuing through the afternoon.

Convertibles have made a comeback in recent years. Back in the  1970s Cadillac actually billed its Eldorado as the “last convertible in America.”

But a revival of the style came about in the next decade, and now there are several choices available ranging from $20,000 or so on up well into six figures.

I owned a couple of convertibles in my distant past, a 1963 Ford Falcon Sprint with four on the floor and a ’65 Chevy Impala. I especially liked the Falcon, which I left on Guam, my first duty station. Knowing what I know now, I could have kept it for sure.

If you are interested in how things go in this year’s competition, we will have results with pictures and video up on our websites later.

I have to go now and get over to the Ritz to prepare for the event and welcome arriving guests.

I know. It’s a tough, tough job, but somebody has to do it. 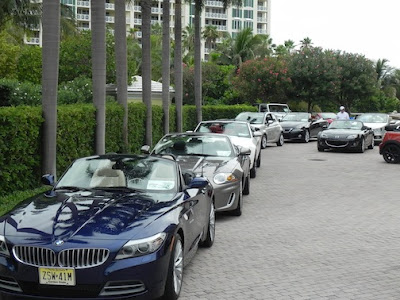