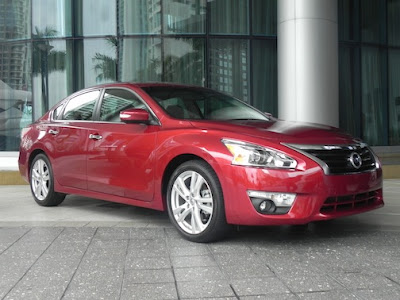 NOT GIVING UP CARS HERE YET

Interesting that just two days after saying I wouldn’t be doing many car reviews on my blog that my next contribution would be about -- ta da! -- cars, of course.
Didn’t intend it that way, but I attended a brief preview featuring the 2013 Nissan Altima yesterday, and I wanted to write about it while it was still relatively fresh.
Nissan had hosted auto writers late last month near the company headquarters in Nashville, Tenn., but I don’t get to many out-of-town events any more unless they are within driving distance. This one being held at a hotel in downtown Miami, this one was within driving distance for me.
One of the more interesting items that came out of the session was the news (to me anyway) that Nissan had passed Honda as the No. 2 Asian brand in the U.S at the end of the company’s fiscal year in March.
Nissan’s share of the market was 8.2 percent, thanks to a quick recover from last year’s tsunami that wrecked Japan’s auto production.
“That’s our all-time high,” Scott Shirley, who is the company’s Chief Marketing Director for North America, told us. “Not only that, it’s our sixth straight year of growth, so it’s by no means a fluke.”
A big reason for that surge is the Altima, which has accounted for 4.4 million vehicles in sales since it was introduced as a 1993 model. For 2013 it is moving into its fifth generation and represents the first of five new or updated models the company has planned for the next 15 months.
For 2011 it was Nissan’s best-selling model and the second-best seller in America, Shirley said. (The Toyota Camry remains No. 1, but Altima beat out the traditional contender Honda’s Accord.)
I’m not going to go into a full review here on the Altima, which will start arriving in most showrooms this month if it hasn’t already gotten to one near year. I hope to have it for a week to give it a full review sometime soon.
Also, I had only a couple of hours in the car for the ride-and-drive with less than an hour behind the wheel, and that time mostly on a cruise down I-95 back to the hotel.
I did find the 2.5-liter four-cylinder engine pretty much up to the task of handling highway speeds. It’s not turbocharged, but for anyone interested in more power than the 182 hp it pumps out, there is also a 3.5-liter V6 version available. It is rated at 270 hp.
Fuel economy goes from 27 mpg city, 38 highway (best in its class) for the four-banger to 22/30 for the V6.
The engine is mated to the company’s latest version of its CVT (continuously variable transmission), which I’m not a big fan of, but it does account for 40 percent of the improved fuel mileage. The V6 comes with paddle shifters which provides a kind of simulation of shifting gears, allowing you to take the tachometer all the way up to redline if you want to.
The four-cylinder doesn’t have paddle shifters but does have a D/S mode that mades the CVT operate essentially like a seven-speed automatic. With all but a mile or so of my drive on the interstate, I really didn’t have the opportunity to get a feel for how that went.
Nissan has come up with two innovations in particular I find appealing.
One is what it calls the “Easy Fill Tire Alert.” When the tire monitoring system alerts you that you have a low tire (and, yes, it designates which one), all you have to do is pull into a filling station and grab the air hose to fill it up.
You don’t have to rely on an indicator on the hose -- usually inaccurate -- to let you know what the pressure is or stop and check it with your own tire gauge. The car will let you know!
Yes, as the air is going into the tire, the car’s flashers will flash to confirm the tire is being inflated. When the tire is full, the horn will beep letting you know to stop. If you continue and overfill the tire, the flasher will flash more rapidly and the horn will beep three times.
If you don’t stop then to let out air, the attendant will come out and rap you up aside the head to get your attention.
Just kidding, of course. Attendants don’t come out at all these days. They’re too busy collecting money for coffee and candy bars.
The other innovation is what Nissan calls “Active Understeer Control.”
The system kicks in when you have gone into a turn a little too fast.
“Instead of kind of plowing through the turn, it will brake the inside wheels and pivot the car in your intended direction,” according to Jay Sizemore, product planner for the Altima. “It’s so subtle that a lot of people will never really notice it.”
It essentially makes you seem to be a better driver than you probably are.
That’s about all I’m going to get into for now until I have the car for a week.
Oh. I should mention pricing.
There are four trim levels for the four-cylinder model, three for the V6.
The base 2.5 starts at $21,500 followed by the 2.5 S at $22,500, the 2.5 SV at $24,100 and the 2.5 SL at $28,050.
The 3.5 S starts at $25,360, the 3.5 SV at $27,780, and the 3.5 SL at $30,080.
More to come later, I hope.