FOCUSING IN ON A WRANGLER


For the last week, I have been driving a Jeep Wrangler.

It’s a fun little vehicle to scoot around in and would no doubt provide even more fun if I could have had the opportunity to do the kind of things it is designed for, like taking it out on a trail, over rocks, or up a mountain. There are trails around here in South Florida, but few mountains, except for those made by piling up trash.
I also have been reluctant to take an off-road vehicle into Everglades trails I am not familiar with. The way I figure it, a vehicle like the Wrangler may handle ruts and rocks with ease, but it also can sink. 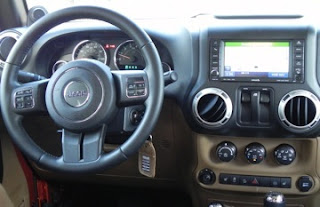 So I was left to drive the Wrangler for everyday tasks, like hauling groceries or running errands, etc.
And how did it compare doing that to the Ford Focus I had the week before?
Not bad. Not ideal for an every-day driver, but not bad.

The Focus is a lot more economical (it’s four-cylinder engine is rated at 25 mpg city, 34 highway compared to the Wrangler’s numbers of 15/19), and no doubt it’s more comfortable for the passenger. The Focus also is a four-door, which makes it a helluva lot easier to get in and out of the back (Wrangler also comes in a four-door version but the Sahara model I had is a two-door) and it’s lower than the Wrangler, which needs the extra ground clearance to handle off-road excursions.
But as far as maneuverability and handling on streets and parking lots, the Wrangler does so with only a bit more noticeably rougher ride than the Focus provides. (Yes, I know it borders on the ridiculous to compare a Wrangler with a Focus, and that’s not my intent. I’m just looking at the way they handle the chores of daily living and driving.)
The Wrangler has some nice touches, too, in the way of creature comforts and has far from the spartan interior you might expect from off-road, trail-rated vehicles. A/C is standard, and it has all the hookups for such things as MP3 players and other audio gear. Satellite radio is available and standard on upper trim levels.
The leather-wrapped steering wheel features finger-tip controls for audio, cruise control, and other functions to attain information such as the distance-to-empty for your fuel, mileage, etc.
There are not quite as many bells and whistles as the Focus offers with its Ford Sync system, but Ford has gotten out in front of its competitors in the way of innovative technology, especially for a vehicle in the Focus’ price range. The Focus starts at under $17,000 for the base model; the top-of-the-line Titanium model, which is full of gadgetry, starts about $3,000 higher.
The Wrangler comes with a much bigger power train, a 3.8-liter, V6, than the four-banger in the Focus, which, of course, accounts for that difference in fuel mileage. It’s also a factor in the Wrangler’s pricing. The Sahara starts at just over $27,000. The top-of-the-line Rubicon starts at just under $33,000.
That V6 pumps out 237 lb-ft of torque, which you need to get its 4,269 pounds over the hills and through the woods securely. The 2.0-liter in the Focus puts out only 136 lb-ft of torque,
but that is enough to handle its 2,600 pounds on city streets and highways.
Both the Wrangler and the Focus are available with either manual and automatic transmissions (well, not quite; the top-of-the-line SEL Focus comes only with a four-speed automatic). Though I love manuals, I always thought an automatic would be better if you’re off-roading, but someone with trail experience once told me that isn’t necessarily the case.
Cutting to the quick here, yes, the Wrangler is a specialized vehicle that takes the description “unconventional” to the extreme, but it’s not so limited that it can’t handle the less-exotic tasks we demand of our cars. If you intend to stay on pavement, though, shop sedans like the Focus.