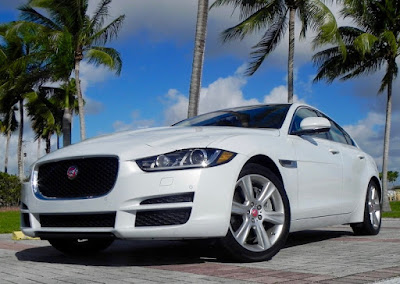 With an out-of-town trip coming up, my last ride of the year was one of the newest cars on the market. I’d say there’s a kind of symmetry about that, a rarity in my usually disorganized life.

The car was the 2017 Jaguar XE sports sedan, which the company calls a “true driver’s car” in adding it to its lineup last spring. The company expects big things from it in a very competitive segment that long has been dominated by German manufacturers Mercedes-Benz, BMW, and Audi. In other words, a tough market.

Early sales results put the XE right in the middle of the company lineup behind its new F-Pace SUV and its XF midsize sedan and ahead of the F-Type sports car and XJ full-size luxury sedan. But it still trails the Teutonic bunch. (All the numbers are available at http://bit.ly/2i1eWMH if you’re interested.) 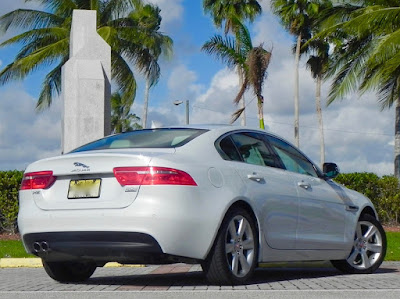 The new XE comes with a choice of three engines with a 2.0-liter, turbocharged 4-cylinder serving as the base. It is rated at 240 horsepower and 251 pound-feet of torque. If that is too meek for you, there’s also a 3.0-liter, supercharged V6 that increases those numbers to 340 and 332, respectively, trimming zero-to-60 mph time to 5.1 seconds from the 6.5 in the base.

I was provided the 20d trim, which is a diesel power-plant. The 2.0-liter turbocharged diesel provides lots of torque (318 lb.-ft.) and provides top-of-the-line fuel mileage of 32 miles-per-gallon city, 42 highway and 36 combined, according to EPA testers. The gasoline versions are 21/30/24 with rear-wheel drive and a mile per gallon less with all-wheel drive. (Frankly, I’m not sure how the government came up with the same numbers for the 2.0L and 3.0L engines, but the mysteries of how the feds work (?) is a topic above my grade.) 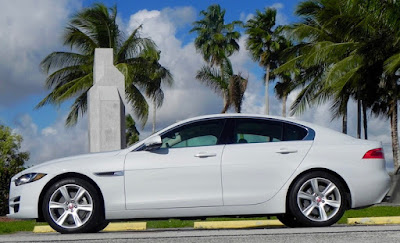 The 20d Prestige model I had for the week was listed at $46,395 including the $995 destination and delivery charge. Included in that were some no-charge options — satellite radio, white metallic exterior finish, and a “Vision” package that included Xenon headlights with LED signature lighting, high beam assist,  front and rear parking aids, and blind spot monitor system.

The 8-speed automatic transmission is operated via a dial that rises up from the center console when the engine is started and features a Sport mode as well as paddle shifters for manual gear selection. The JaguarDrive Control system offers the option of various settings to enhance performance with the dynamic setting providing sportier performance. 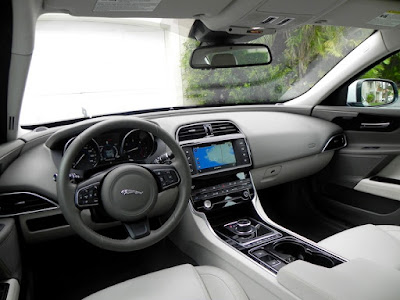 And yes, there is also a start-stop mode to reduce fuel consumption when idling, though you can turn it off by pushing the button on the console. But you have to do that each time you restart the engine.

All in all, the bold, distinctive exterior and the classy, eye-pleasing interior makes the 2017 Jaguar XE a must for anyone shopping in the segment, especially those who want to stand out from the crowd.

What I liked about the 2017 Jaguar XE: It has a distinctive look and character about it. Putting in destination information for the navigation system was easy enough, though some of the other functions are a bit more fussy to operate.

What I didn’t like about the 2017 Jaguar XE: The road noise seemed a bit excessive at typical expressway speeds. (But there was no wind noise at all.) The voice commands on the navigation system were a bit on the excessive side. Do you really need to be told that in 3.2 miles you should “continue straight” on the route you are on?

Would I buy the 2017 Jaguar XE?: Probably, but I would like to drive one of the gasoline versions. The diesel engine had kind of a low, bass sound that made it seem like it was laboring at times, which, with all that torque, certainly wasn’t the case. But it was the feel I got with it. 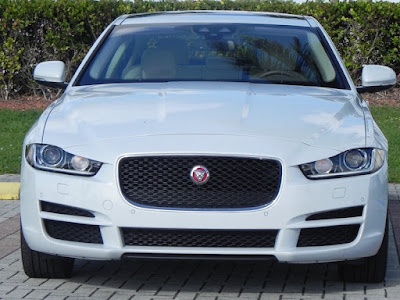