WHEN IT COMES TO HOUSEHOLD PROJECTS,

I SAY PUT A CAULK IN IT

I’m not much of what you would call a “handyman” when it comes to household tasks. Anything beyond changing a light bulb can be a major challenge for me, and even that can be a pain if the bulb I’m changing happens to be the one outside by my garage door. That one involves getting out a short ladder and taking off a cover. Oh, the humanity!

But after getting back home from a trip north for Christmas (I’m thawed out now, thank you very much), I decided to take on the chore of re-caulking the shower/tubs in our two upstairs bathrooms.

I vaguely remember doing this on the tub for the master bath, but not sure about the one in the other. But if it was done by the builder, he sure did a sloppy job of it. So maybe it was me.

Anyway, with my basketball coverage at a lull this past week and no car review to write until next week, I figured this was as good as time as any to take on the task.

I figured one day, maybe three total, for each.

I’ll pause until you stop laughing.

First, I made a run to Home Depot for caulking and anything else I might need. Long ago I used to have a caulking gun, but I have no idea what became of it. Probably rusted away.

Fortunately, caulking is available in tubes now similar to toothpaste, except you have to cut the ends off at a 45-degree angle. I wasn’t sure how many to get, so I picked up three. They’re not expensive.

Upon returning home, I gathered up the necessary tools. Luckily, save for an extra razor blade that would have come in handy, I had pretty much what I needed.

Upon hitting the guest bathroom first (I figured that would serve as a tuneup before getting to the master bath), I started removing the old caulking. I wasn’t more than five or ten minutes into that before a thought it me: This is going to take a while.

To make sure there wasn’t some easy way of accomplishing this that I was overlooking, I went to my laptop and searched Youtube for a video on removing old caulking. Alas, there was no secret way, but I did run across something called caulk remover.

The cost of such miracle material varied from cheap to $100 a bottle (I’m serious). I gambled that Home Depot would have something cheaper and made my second trip to see what they had. Yes, Home Depot had it in a spray bottle, like 409 cleaner. And it wasn’t $100 but less than $10. (Can’t find the receipt.)

An aside here: This second trip turned out to be my last. I’m quite proud that I could gather everything I needed in just two trips to the Home Depot! Take that, Russ!

The caulk remover did seem to help, but I still spent the rest of the afternoon chipping away at the old caulking. At one point I happened to go downstairs and my wife asked if I was finished yet. Been married going on 49 years and I didn’t realize she could be so sarcastic.

I could see that my estimate of one day for each of the bathrooms was going to be seriously off. Of course, it might have helped if I had gotten an earlier start, but I’m not a morning person. Afternoon and late nights seem to be when I do most of my writing, and apparently it’s the same with other chores with me.

One complicating factor in the guest bathroom was a hole in the wallboard between along one of the edges of the tub. It would take more than caulking to fill that, so I was working with Dap wallboard compound to fill it, which was kind of messy.

So much for the first day. I had to leave the Dap to dry, of course, so it wasn’t until the next afternoon (Friday) that I got around to actually putting in the new caulking around the other tub edges. That went surprisingly well.

The Youtube video had mentioned wetting a finger to smooth out the caulking, and one of the viewers had mentioned that it wasn’t a good idea to use a bare finger because it would leave bacteria or something that eventually would work its way through the caulking.

So I used examination gloves to do that. I just wish I would have put one on my left hand as well as my right. I didn’t because I didn’t think I would be getting any excess caulking on my left. Wrong again!

There was one other spot at the tap end where the separating between tub and tile was such that more Dap was needed to fill in, so I couldn’t caulk that area until Saturday. Which I did earlier today. Success!

So the project actually extended over a three-day span. It looks pretty good, too, at least my standards. Just don’t look too close. But I still have the master bath to do. When I get the energy. 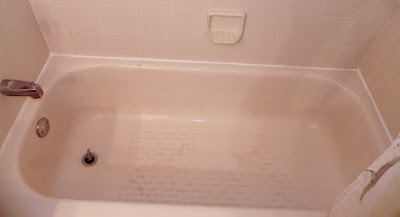