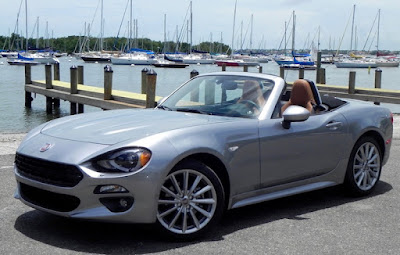 Nothing gets me more stoked than to hear that my friendly press fleet manager plans to deliver a new convertible to my driveway for one of my weekly test runs.

Well, nothing, that is, unless that convertible is also a sporty little two-seat roadster in the mold of traditional British sports cars from the 1950s and early ’60s.

There’s just something about them that pushes all the right buttons with me.

Of course, opportunities to get behind the wheel of such cars are pretty few. In fact, though there are roadster offerings from both Europe and Japan, only one really comes close to matching the classic MG, Triumph Spitfire, and Austin Healy models of a half-century ago, and that would be Mazda’s MX-5 Miata.

When you factor in such items as cost and size, the Miata pretty much alone at the top of the segment.

But now it has a competitor.

Fiat’s 124 Spider is back in U.S. showrooms for the first time since the Italian automaker ceased production of the original back in 1985. (Google “Fiat 124 Spider history” for an interesting read.) 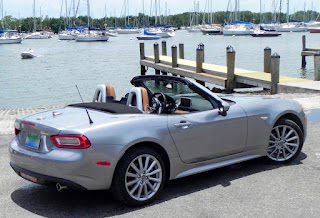 And, oddly enough, it got a hand from Mazda to get here.

The 2017 Fiat 124 Spider is pretty much an Italian take on the Miata, and the similarities between the two are so significant it may have you doing double-takes as you slide behind the wheel. Even the screen for the Spider’s infotainment system sticks up from the dash, just like on the the Miata.

The fabric top is manufactured by the Haartz Corporation and operates the same way on the Spider as on the Miata. To lower, you undo the latch and flip it back over your head until it clicks in place. To raise it, you (as the driver or passenger) reach back and hit a release button between the seats.

The top then pops up just enough for you to get a hand on it and pull it back over your head, snapping the latch at the top of the windshield back in place to secure it. You can do it while waiting at a redlight with time to spare. 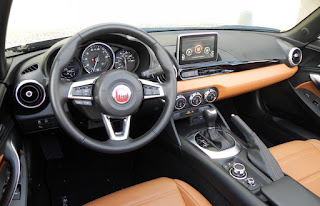 There’s a reason for the similarities. The Spider is built alongside the Miata at Mazda’s assembly plant in Hiroshima, Japan, with Mazda providing the platform for the two-seater as well as some other attributes.

There are differences, of course, and it would not be correct to say that the Fiat 124 Spyder is nothing more than rebadged Miata.

The engine in the Spider is a 1.4-liter turbocharged four-cylinder that sends 160 (Classico and Lusso trim) or 164 horsepower (Abarth) to the rear wheels via either a six-speed manual or six-speed automatic transmission. The Miata gets a 2.0-liter four-banger featuring the company’s SkyActiv technology with 155 horsepower and 148 pound-feet of torque. It’s also mated with either an automatic or manual tranny.

The Spider is 159.6 inches long with a wheelbase of 90.9 inches. The Miata has the same wheelbase but is slightly shorter at 154 inches. There are only tenths of inches difference in height and width. 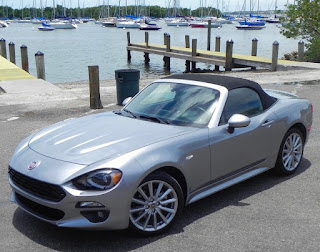 And there are distinct differences in the exterior with the Fiat getting styling touches like creases in the hood and its own headlight style, which is a bit more open than the catlike slits of the new Miata. 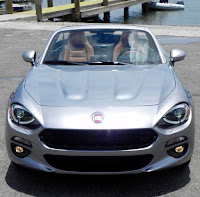 But the real common denominator between the two is that both offer a fun driving experience. Even with the automatic transmission in the Fiat I had, the extra oomph from the turbocharged engine compensated for the Spider’s extra weight in delivering a peppy performance similar to that from the Miata.

Which brings up a question: With both vehicles carrying starting prices under $30,000, Fiat would seem to be getting significantly more out of this collaboration with Mazda than the Japanese automaker is. Fiat gets a significant addition to its lineup in the U.S. Mazda gets a strong competitor for its popular Mita. 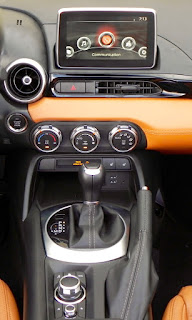 I asked a Mazda spokesperson about that, but that answer I got was that nobody is allowed to comment on the company’s “partnership” with Fiat/Chrysler.

Not that it matters. The result is a win for fans looking for an affordable sports car for their garage.

What I liked about the 2017 Fiat 124 Spider: It’s a fun car to drive. It’s got all of the attributes of the Miata, and the styling tweaks add a touch of class.

What I didn’t like about the 2017 Fiat 124 Spider: Unfortunately, the Spider’s infotainment system (audio, navigation, etc.) is identical to that of the Miata and is not the most user-friendly. Everything except the climate control works off a knob below the gear shifter on the center console with the requirement that the screen be in the right mode. With the top up, the car a bit loud at higher speeds on the expressway (we actually got off the turnpike and got back on city streets so we could hear the radio on our way home), and a flat-bottom steering wheel would be nice to help ease access and egress for the driver.

Would I buy this car? In a heartbeat. 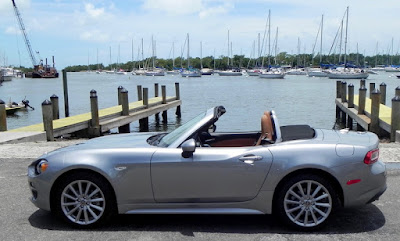