CATCH A Z (NOT ZZZZZZ) 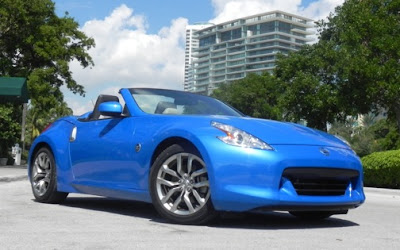 When it was reintroduced to the U.S.market nearly 10 years ago after a six-year absence, Nissan’s 350Z represented one of the best bargains -- I would say best period, but don’t want to get into that debate here -- among sports cars available.
It offered everything you would want in a sports car -- looks, horsepower, handling, rear-wheel drive, big wheels, and plain ol’ fun behind the wheel in a two-passenger package -- and at an affordable price.
Two versions of the multi-tiered lineup for the 2003 model year started at under $30,000, one of them for under $27,000. 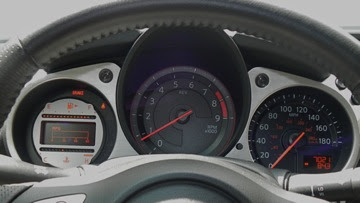 Two of its four chief competitors -- the BMW Z3 and the Honda S2000 -- started above the $30,000 mark. Two others -- Toyota’s MR2 and Mazda’s Miata -- cost less but their four-bangers didn’t match the power the Nissan Z got from its V6 engine.
Needless to say, the Z’s return was a welcome one. 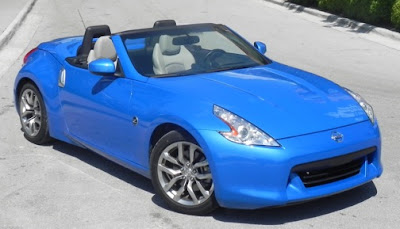 Nearly a decade later, the Z costs a bit more and has grown from the 350 designation to the 370Z. But it still is a bargain and hasn’t lost any of the qualities that have made the Z an automotive icon since its unveiling as the Datsun 240Z more than 40 years ago.
The starting price for the base 2011 370Z in coupe form is less than $32,000, which gets you things like 18-inch wheels, cruise control, power windows, Nissan’s Intelligent Key system, cloth bucket sport seats, etc. The Touring and Nismo trims add fetures like leather and suede seats, Bluetooth, power seat adjustments and more but jack up the starting MSRP to the mid-$30,000 range (Touring) and just over $40,000 (Nismo).
My recent experience with the Z was the 2011 370Z roadster. It comes in two trims, the base, which starts at just over $38,000, and the Touring, with a starting price tag of just over $42,000.

Oh-oh. We’re not so much a bargain now, are we?
You may think not, until you look at the price of some of the high performers in the sports car segment. Then the Z still looks pretty good. (By the way, don’t bother looking for the Honda S2000 or the Toyota MR2. They’re available only on used car lots these days, and the Z3 is now the Z4. But you gotta love that Miata!)
Of course, it’s not just the fact that the Z is a bargain (in coupe or convertible form) that makes it special. 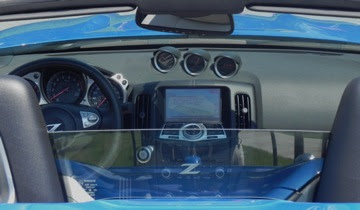 It would still be a good buy even if the price were jacked up, not into six-figure range but up there just below some of the offerings from Teutonic competitors. Not that I’m suggesting anything here. Just saying.
The Z comes with a 3.7-liter V6 under the hood that sends 332 horsepower and 270 pound-feet of torque to the rear wheels. Considering the curb weight is less than 3,500 pounds, that’s a pretty good power-to-weight ratio.
Two transmissions are offered, a six-speed manual (my choice) and a seven-speed automatic. With the optional Sport Package, the six-manual is available with Nissan’s SynchroRev Match. This system automatically controls and adjusts engine speed when shifting to the speed of the next gear selection. In other words, it automatically “blips” the throttle for you to smooth out shifts.
I’m not saying that’s good or bad, but hey, if you need something like that, why not just opt for the automatic? You can still select gears and up- and down-shift with steering wheel-mounted paddles or the shifter on the console. 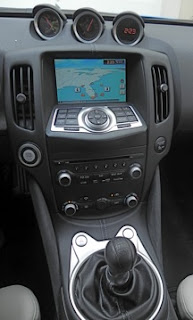 All that combination of power, weight, and transmission delivers fuel economy ratings of 18 miles-per-gallon city, 26 highway for the coupe and 18/25 with the roadster. Premium fuel is recommended, and I wouldn’t use anything else.
That’s all nice, but what I really like about the Z is that it looks like a sports car inside and out. It has a firm, muscular stance  with rounded lines up front and a hefty rear end. Sounds like a sports car, too, with the dual exhausts emitting a pleasant hum.
The roadster comes with a soft top, which is easy enough to operate, though it doesn’t look quite as good with the top up as it does down, which is usual with ragtops. I always did like topless models. (Rim shot!) 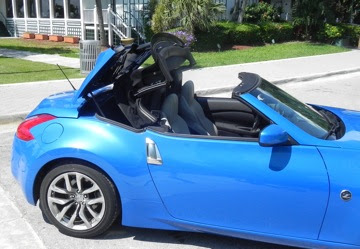 The Touring model comes with heated and cooling ventilated leather seats as standard, which also added to the ambiance of the one I drove. High-quality materials are used throughout the cabin, including faux suede inserts on the door panels. Nice touch.
I found the controls for the navigation system, A/C, and radio easy enough to operate. In fact, the only control I had trouble with was the button to open the trunk. It took me a while to find it. It is just above the license plate and kind of tucked under the trunk lid, and it wasn’t obvious to my touch the first time I tried to open it.
But then, there’s not a lot of room back there any way, what with the cloth top folding back and covered with a body-colored tonneau, an operation that takes about 20 seconds.
This is a sports car, remember. Not a U-Haul. 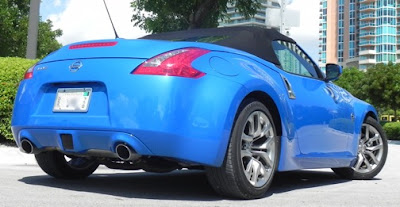 The Z corners quite nicely with no body roll to speak of. I didn’t get the opportunity to take it out on the track, but I did cut turns as sharply and quickly as I could just to see how it handled.
I love to make a quick turn and accelerate as rapidly as possible, then level off the power just at the speed limit to frustrate any cop who might be watching with ticket book in hand.
Overall, the 370Z has a lot more to offer than just its competitive pricing. It stands very well on its own merits against just about any challenger, save one of the Super Cars. For competing in that class, you need to call on another member of the Nissan family, the GT-R.
If you wonder what I mean by that, just check out www.youtube.com/watch?v=uDP7Pty8Qnw. 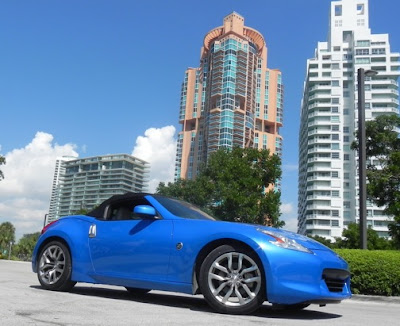