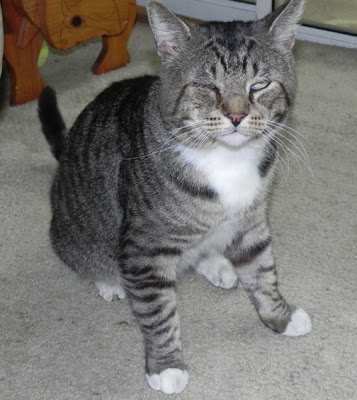 We have had a change in our lives in recent years, and, no, it’s not what you’re thinking.

We once were dog people. Less than two weeks after we were married, we went down to the animal shelter in Long Beach and brought back home with us a mixed border collie.

He was a delightful dog who through the years had a knack for getting into the background of family pictures. We’d be looking through Christmas photos and all of a sudden we would notice him sticking his nose in the middle of a picture of one of the kids unwrapping gifts to see what the fuss was about.

After Hafa Adai passed (I’m not going to get into where the name came from but it’s pronounced “hof-a-day”), we were several years without another dog until one Sunday afternoon the kids asked to go down to the animal shelter there in Jackson. I thought it would be closed, being Sunday and all, but I was wrong. This time we brought home a mixed golden retriever puppy we named Beaux.

A few years later, we were gifted with a Peke named Nikki. Beaux was 17 when he passed, Nikki much younger, and then we had Mikki, who had been my daughter’s tiny Peke, (She was once pictured in Dave Barry’s Christmas gift guide -- Nikki, that is, not my daughter.) Mikki didn’t like the new baby my daughter had introduced to her household, so Mikki wound up with us.

Then Mikki developed tumors, and we lost her despite several surgeries.

So we were definitely dog people.

Now, suddenly we are cat people. 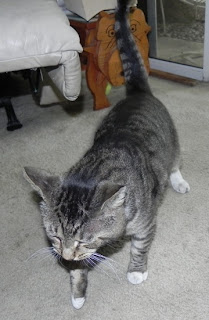 I had both when I was growing up, so why not?

I won’t get into all the details here, except to say it really is true when someone said, “People adopt dogs; cats adopt people,” or something like that. A month or so after Mikki was gone a mother cat we thought might belong to a neighbor brought her tiny kittens by. We fed them, and that was that.

Fast forward here. The mother cat (Princess) had a couple more litters before I decided even if she was someone else’s cat she needed to be spayed. The last litter was two kittens, both males, who were born in our spare bedroom. Aside from Nikki and Mikki, two AKC-registered Pekes, those two cats are the only pets I’ve had that I know the actual birth dates of.

But I’m not writing about them.

I’m writing about the big cat we think was their father.

Tiger, as we named him, was essentially a stray who came to stopping by for a quick bite or two and probably to see what was up with Princess. He was a funny looking thing with a huge head and slender body, and he looked like he had been through several battles.

I did try to discourage him from hanging around. During “mating season” he would annoy everybody around with his skirmishes with other males. Once when I heard a commotion out in the yard, I went out and one of the cats immediately took off. Though I stomped my foot in front of him and tried to shush him away, Tiger just sat and looked up at me. 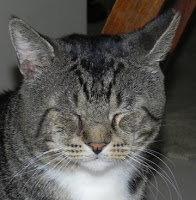 During the heat of the summer Tiger would spend afternoons in our air-conditioning, but since every once in a while he would feel the need to mark his territory, my wife didn’t want to let him in very often. He always went out at night.

Mostly, Tiger remained an occasional outdoor visitor only. Sometimes we wouldn’t even see him for a day or two.

Then a little while back my wife made the observation that Tiger looked as if he had been “fixed.” (Isn’t that a funny word to use for neuter; after all, the cat obviously isn’t broken.)

I didn’t pay much attention until I noticed his ear. I don’t know how it is elsewhere, but the Humane Society down this way clips a stray’s ear after he/she has been neutered/spayed, then let’s them go. Supposedly, when if a trapper catches a stray so marked, he then let’s them go.

Sure enough, Tiger’s ear was clipped.

And boy oh boy has his behavior changed.

He now likes to spend most of his time indoors, and he doesn’t fight with any of the other cats but accedes to their demands. He seems almost polite awaiting his turn to eat.

His body has filled out to fit his head so he no longer looks out-of-balance, and he likes nothing better than to sit on my lap and have me rub his head. He doesn’t like me to rub his back, but he likes to have his head scratched. 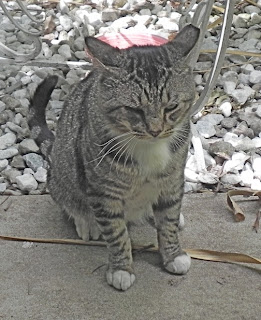 He gets up late while I’m watching TV and goes to the door to be let out, and then less than an hour later he is back sitting in front of the sliding door to be let back in.

I have no idea how old he is. Probably not as old as he looks.

He still has a weather-beaten look about him, kind of like an old grizzled Navy chief bos’n mate I once knew. His right eye sometimes looks it may have a problem, probably the result of some past battle. The white parts of his fur are never going to be real white again.

But he’s still a good ole cat. Ugly and unattractive as he is, he’s hard not to like.

I get kind of a good feeling thinking that life for Tiger is much more pleasant now and not the daily struggle it probably once was. Or at least how I imagine it was. Our neighborhood isn’t that bad.

NOTE: When I had finished writing this, I did a little surfing on the web and then started to get up to go the other room. When I turned around, there was Tiger, sitting in this chair beside me. 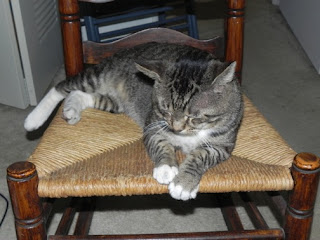