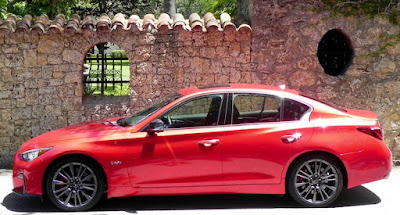 
It seems like it was just a month ago that I got a red 2017 Infiniti Q50 Red Sport 400 for review. Actually, of course, it wasn’t that recent. It was back in November.

But this year still has over four months to go, and already now I have had the pleasure of spending a week in the 2018 Infiniti Q50 Red Sport 400.

Time flies, especially when you’re having the fun I did in the two vehicles.

As was the case when I drove it late last year, my time was spent in the Q50 Red Sport 400, which is the sportiest of the group (natch) with a 3.0-liter, twin-turbo V6 engine that sends 400 horsepower (hence the 400 designation) and 350 pound-feet of torque to the rear wheels via a seven-speed automatic transmission. (All-wheel drive is also available.) 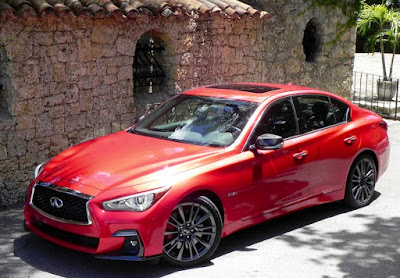 With a likely zero-to-60 time of well under five seconds (the 2018 clocking wasn’t available and the website zeroto60times.com caught the 2016 Red Sport in 4.5 seconds), the Q50 Red Sport gets high grades when it comes to performance.

In addition to the tweaks to the trim level names, Infiniti also refreshed both the interior and exterior with some styling tweaks to the front and rear fascias and a new steering wheel. Designers also added another color — Mocha Almond. In plain English, I’d call it light brown, but I don’t know for sure. Both of the Red Sport models I had were, appropriately enough, red. Dynamic Sandstone Red. I like red.

Visually, other than that, there isn’t a lot of difference. And that is a good thing because the Q50 has a rather sexy profile, not coupe-like but close, and the cabin is attractive with high quality materials throughout. Also, it is comfortable and quiet. 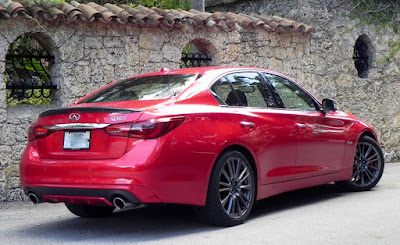 Mechanically, a refined electronic power steering is new, and Infiniti’s Directive Adaptive  Steering is available as an option. With either one, the car pretty much goes in the direction you point it, and isn’t that the idea?

Frankly, as I have mentioned before (somewhere in previous blogs), it’s hard to get much in the way of feedback when it comes to steering driving South Florida’s mostly straight roads with 90-degree intersections and the occasional expressway on-ramp.

The Red Sport rides on new, 19-inch aluminum wheels that are slightly wider (9.5 inches) in the rear in RWD models and the same all-around (9.0 inches) with AWD. That’s the same as last year’s Red Sport as are the EPA numbers of 20 miles-per-gallon city, 26 highway combined with RWD and 19/26/22 with AWD. 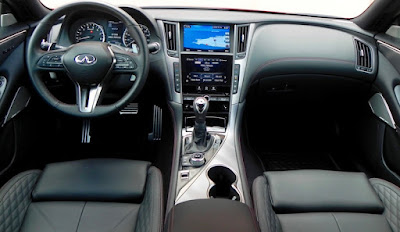 I’m thinking that a dealer who is looking to get 2017 models out of his showroom might be willing to haggle, but then what do I know? I may be the only guy who started to pay retail for a golf bag in Mexico.

What I liked about the 2018 Q50 Red Sport 400: Pretty much what I did about the 2017 model, which among other things was its driving performance. I like the idea of a two-screen center stack — one for the navigation map, the other for audio and other systems — and the intuitive way they operate.

What I didn’t like about the 2018 Q50 Red Sport 400: I’d like to see a knob for surfing the radio dial instead of pushing a button. Yes, I know you can set presets for local radio but what about when you go out of town? I also had an issue with taking and making calls despite hooking up my cell via Bluetooth. You can blame me for that. A techno-whiz I am not.