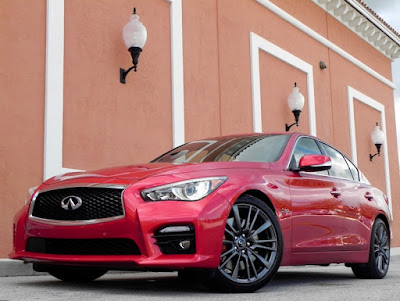 WHATEVER YOU CALL IT, INFINITI’S Q50 SEDAN

I like red cars. Unless you count a maroon Ford Falcon Sprint convertible I had back in the mid-1960s, though, I’ve never owned one, but I do like them.

Thus when a red 2017 Infiniti Q50 sedan showed up in my driveway recently, it had me at first look. That it happened to the top-of-the-line Red Sport 400 trim just added to the anticipation.

If you don’t recognize alphanumeric Q50 tag, it is what Infiniti now calls its smaller luxury sports sedan these days. Before the company went to the system of designating its convertibles, sedans, and coupes with the “Q” badging and crossovers and SUVs with “QX,” the Q50 was the G37. (The G37 coupe/convertible goes by the moniker Q60.)

It wasn't a direct line from one to the other as there was the short-lived Q40 sedan, which the company took out of production in 2015 after one model year, kind of in between, and for a while the company sold both. But that’s how it has ended up. 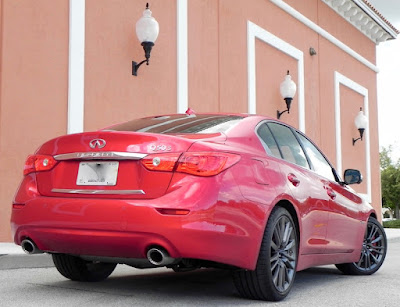 Whether it was a reluctance to accept the new naming system or genuine criticism, the Q40 and later the Q50 got a rather lukewarm reception among many reviewers, who preferred the G37 to the redesigned model that replaced it.

Wards Auto called the 2014 Q50 not “a big leap forward over the G37” that it replaced but added that it wasn’t “all bad.” Edmunds.com praised it for its technological features and interior quality, but wasn’t as enthusiastic for its handling and ride quality. In its analysis of reviews, U.S. News & World Report rated it no better than No. 11 out of 20 luxury sports sedans.

Though the competition is tough (Audi A4, BMW 3-Series, Mercedes-Benz C-Class, etc.), I think that is underrating the Q50 a bit. Its exterior is striking, especially in what the company calls its new “Dynamic Sandstone Red” color, its roomy cabin coddles riders with high quality materials, and the response from the 3.0-liter, turbocharged V6 engine in the Red Sport model is equally up to the competition.

That engine is rated at 400 horsepower and delivers 350-pound feet of torque to the rear wheels via a 7-speed automatic transmission that can shifted manually through paddles mounted on the steering column and also can be adjusted to Snow, ECO, Standard, Sport, or Sport-Plus modes depending on conditions or your own personal wishes at the time. It’s also available with all-wheel drive.

A slightly milder version turbo V6 that is tuned for 300 hp and a 2.0L turbo 4-cylinder engine are also offered as well as a gas-electric hybrid drivetrain on other trim levels. 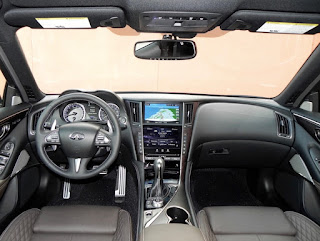 Other good stuff, like special seating, adaptable cruise control, blind spot warning and lane departure warning, Infiniti’s InTouch infotainment system with navigation, etc. is available in option packages that, along with the $905 destination and delivery fee, ran the total cost of this 2017 Q50 Red Sport 400 up to $60,220.

There are five other trims with the base starting at about $25,000 less. 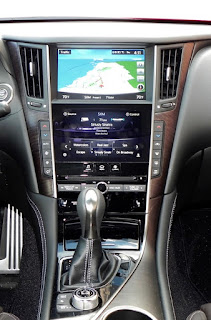 What I liked about the 2017 Q50 Red Sport 400: Other than the driving performance — the website zeroto60times.com clocked the 2016 Q50 Red Sport 400 in 4.5 seconds — I liked the idea of having two screens on the center stack. One displays the map for navigation and is operated by the knob on the console. The smaller, lower screen, is for audio, climate, and other functions. Being able to make adjustments without having to change screens is a nice touch that I have seen only here and on some Honda/Acura models.

What I didn’t like about the 2017 Q50 Red Sport 400: The manual offered little in the way of help, and it took a while, but I finally figured out to change the clock from EDT to EST. There could be issues with instructions for other functions as well, but I find that this isn’t an issue exclusive to Infiniti but to auto owners’ manuals in general. Also, call me a traditionalist, but I don’t see what was gained in the name change from G37.

Would I buy the 2017 Infiniti Q50 Red Sport 400: It would be my choice from among the other trims for sure. And I would make sure it was red. 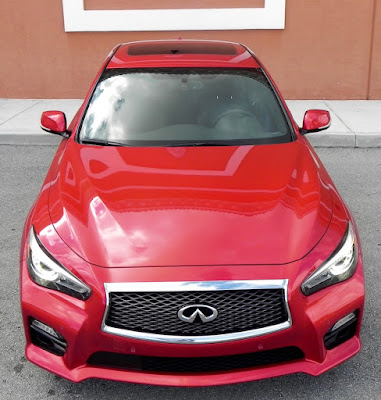