For the last week, I have been driving the 2011 Infiniti EX35 Journey, and it has been a very pleasant experience.

The EX35 looks great, handles well (which it should; it is built on Nissan's FM -- for Front Midship -- platform, same as the company uses throughout its sedan lineup), and is comfortable with all the little extra touches, like the signature analog clock in the center stack, you expect from a vehicle from Infiniti.

The 3.5-liter, V6 engine delivers adequate power (297 hp, 253 lb.-ft. of torque) to move the Journey's 3,795 pounds with alacrity. (The base model is slightly lighter, and AWD models are slightly heavier. I was in the RWD version.)

Power gets to the rear wheels via a very smooth-shifting seven-speed automatic transmission with manual shift capability (on the console lever, not steering wheel-mounted paddles). It’s much better than the CVT (Continuously Variable Transmission). The slight downside is that premium fuel is recommended, and it drinks gas at the rate of 17 mpg city, 24 highway.

The front seats are plush and comfortable and roomy. The back, I fear, not as much. Comfortable, yes, but not as roomy,
especially if the front-seat passenger has leaned the seat back. The EX is listed as five-passenger capacity, but the three in the back better be small kids, which, considering most buyers in this segment, they probably are. 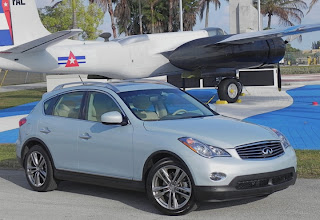 It is a true luxury compact of the early 21st Century genre called CUV (Crossover Utility Vehicle). What this is is a vehicle that has the profile of an SUV but is built on a car platform and sits lower. It is meant for driving on paved roads with no more off-road challenge than a gravel parking lot, and considering that I wouldn’t want a rock to damage the pristine finish, I would hesitate to go there.

Naturally, the EX35 comes with a long list of standard features you expect in the luxury field (leather all over, USB connection port for iPod and other devices, steering wheel controls for cruise control and audio adjustments, a rearview monitor, satellite radio, etc.), and enough options are offered to run the base price from the mid-$30,000 range into the mid-40k neighborhood, which is about where its bigger brother, Infiniti’s FX series, starts.

A couple of the many features on my test vehicle ($46,206) were a Lane Departure Warning system that gives the driver a gentle beep alert should the vehicle begin to veer out of the lane without the turn signal being activated and a Forward Collision Warning system.

The latter was pretty sensitive, giving a slight beep when cars ahead lagged the slightest when making a right turn if I didn’t tap my own brakes fairly early.

“I like that system,” said my wife, who kind of is the nervous-passenger type. 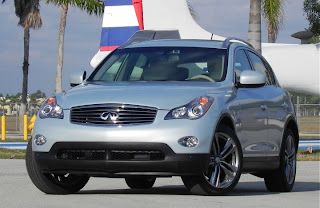 Controls for all the available technology, including the optional navigation system, are easy enough to operate. It took me a while to find out how to adjust the analog clock (there also is a digital time display on the navigation screen), but that was about it.

My only real questions about this vehicle aren’t with the vehicle itself, but with the compact crossover segment. I mentioned the fairly snug backseat. Well, storage space (with the rear seat in place) is snug, too, only 18.6 cubic feet. That’s good for groceries and is bigger than a sedan trunk (like the G37 sedan and its 13.5 cubic feet), but not not for serious trips to Home Depot. The FX offers 24.8 cubic feet for cargo with the seat up.

So it kind of comes down to this: The EX doesn’t carry as much stuff as the FX, but is more fun to drive. But it’s not as much fun as the G Sedan or Coupe. Especially the Sport Coupe. But the EX carries more than the G.

Whatever floats your boat.
Posted by Paul Borden at 10:10 PM